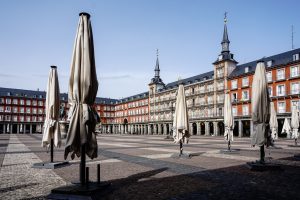 Madrid, March 19, 2020. Since the state of alarm was declared by the government of Spain on March 14, the streets of Madrid have been depopulated of people and vehicles. The population is confined to their homes.
The Plaza Mayor is one of the busiest squares in the city as it is considered to be in the city center, with restaurants and terraces where tourists sit down to rest and drink or have tapas. In a normal day it concentrates a high density of people.